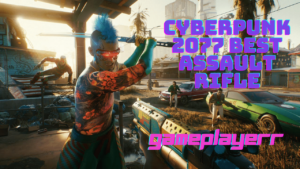 How to find weapons: Cyberpunk 2077 is all about weapons, gears, customizations, choices, and side jobs. So you need weapons and gear to complete missions and side quests in the game. In Night City it is very tough to survive without having weapons and gears. You can try collecting gears and weapons or you can buy them from the shops or vendors in Night City.

Getting Weapons in Cyberpunk 2077: The best way to get weapons is by Crafting. Most of the weapons and gear that you will be using are customized eqip[ments and you can only get them from the enemies or you can also purchase them from the shops or vendors. Also, you need to know that, there are a lot of rare and legendary weapons that you cannot buy from the shops and vendors, you can only get them by doing Mission and side jobs in the Night City. These weapons are named iconic weapons.

So, we have collected all the information and have made a list for you of the Cyberpunk 2077 Best Assault Rifle, have a look at the list below.

So, below is the list of Cyberpunk 2077 best assault rifle which is present in the night city, have a look:

Prejudice: The Prejudice is a powerful Assault Rifle and the base weapon of it is HJSH- 18 Masamune. The special quality of Prejudice is that it can do piercing projectile which is very harmful. The Prejudice can also be picked up from the bar in Afterlife at the time of To Whom the Bell Tolls quest.

Read More: Can you Romance multiple Characters in Cyberpunk 2077?

Moron Labe: Moron Labe can only be crafted and you can not get it by buying it, it is also a very powerful assault rifle. This can add up the rate of fire with a chance to dismember and the base weapons of Moron Labe is M251s Ajax. You can get it from crafting spec from an enemy at the time of criminal activity in West Wind Estate.

Divided We Stand: So the first one is Divided We Stand. It is one of the powerful Assault Rifle in Cyberpunk 2077. It is a smart assault rifle type and has a base weapon of D5 Sidewinder. The special quality of Divided We Stand is that it can target up to five people at a time and it deals with chemical damage and have poison as well. Divided We Stand also won the shooting contest in Pacifica at the time of Stadium Love Side Quest.

Psalm 11:6: Psalm 11:6 is also quite a powerful assault rifle and can only be found to be crafting. The Base Weapon is D5 compressed. You can craft it during the suspected Organised crime activity in Northside and also note that it has a slot in V’s apartment.

Read More: How to Level Up Fast in Cyberpunk 2077? Easy Guide

Window Maker: Window Maker is a tech assault rifle and the base weapon is M- 179 Achilles. The Window Maker fires 2 projectiles in one shot. It deals with chemical damage and can only apply poison. Charged shots of this rifle can harm more damage. It can be picked up during the Main Job in Ghost Town.

So this was all about the Cyberpunk 2077 Best Assault Rifle.

Hopefully, you will like our approach on Cyberpunk 2077 Best Assault Rifle.