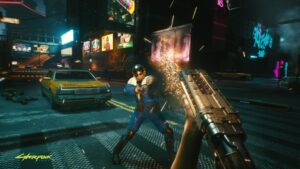 Cyberpunk 2077 has just launched and fans are enjoying the gameplay very much that the developers, CD Projekt Red, which we will call CDPR, has crossed a total of $480 million in sales, even before the game was launched and the Cyberpunk 2077 is now on top of the charts.

Cyberpunk for Streamers: Cyberpunk 2077 has become of the top games that get streamed on all the social media platforms on the launch day. Streamers are streaming the game all over the internet. As cyberpunk 2077 supports streamers. The CDPR introduced a new feature that none of the games included yet, the feature is named Streamer mode. With the help of the streamer mode, streamers could disable the copyrighted music, playing in the game.

All details about Cyberpunk 2077 Cheat Codes

So these are some questions revolving all around our social media handles, all over the internet, after the most anticipated AAA title of the year, Cyberpunk 2077 has come out. At the launch of Cyberpunk 2077, there is nothing known as cheat codes. Many fans are directly asking the developers about the Cyberpunk 2077 cheat codes, but CDPR is quite on this matter, they are not replying, it could be because they don’t want to reveal the cheat codes as of now in the gaming community.

This tool will help you enter the commands in the game which the developers use to debug the game. You might be able to crack some cheat codes with the help of the debug console tool, but we don’t recommend you doing that because it might break your game files, and then you will need to re-download the game from the beginning. The Cyberpunk 2077 is already very buggy without the cheat codes and all, so even if you get some cheat codes working in Cyberpunk 2077, we don’t recommend you using those codes.

So this was all about the Cyberpunk 2077 cheat codes and Debug console.