Cyberpunk 2077 Update 1.02 Patch is now out. The developer, Projekt CD Red pushed an update to the game before the official game launch. This update has some minor bug fixes and improvements to the game. Many reviewers played the game before the launch and found the game buggy and laggy. So the developers have tried to fix some of the minor issues which was reported by the reviewers. So here we will see that what issue does cyberpunk 2077 had, and what issues have been fixed. 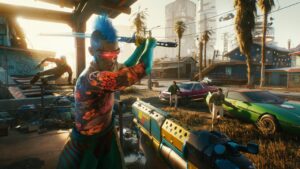 The cyberpunk 2077 update 1.02 is out before the day of the official release of the game. Projekt CD Red has released the update 1.02 to fix some minor issues in the game. There were some issues that were reported by some popular reviewers. Many reviewers played the game before its launch, so they can tell the users about their experience of Cyberpunk 2077 gameplay. Reviewers said that the game was buggy and a bit laggy too. The game had some issues which we will discuss in the next section of the article.

The developers, Projekt CD Red doesn’t want to provide users a buggy and laggy experience so they have tried to fix some minor issue which they wanted to before the official game launch. So let’s have a look at what are some issues in the game, which you might face when you play the game for the very first time, and what developers have tried to fix in Cyberpunk 2077 with the Update 1.02 Patch.

Cyberpunk 2077 Update 1.02 Patch Notes is out before launch

Cyberpunk 2077 is coming out tomorrow on Dec 10, 2020, officially. Cyberpunk 2077 is one of the most anticipated games of the year 2020. Fans who preordered it and even did not pre-order the copy of the game were waiting for a long long time now. The official launch of the CYberpunk 2077 was getting delayed again and again and it was frustrating for the users who pre-ordered a copy of the game a long time ago, but they did not even know that when will the game come out officially.

The Cyberpunk 2077 is coming out tomorrow and if you have bought a copy of the game, you should pre-load the game now. The game was available to preload on PS4 from December 07, 2020. There were several issues found in the game before its official launches such as the buggy and laggy gameplay. The bad AI of the game and many more.

So now let’s have a look at the Cyberpunk 2077 Update 1.02 Patch Notes and the issues that haven’t been fixed yet. There are some more issues which we will talk about which might be fixed in the future or not we don’t know, but if you are looking to purchase yourself a copy of the game, that issue can be a deal-breaker, have a look.

The Cyberpunk 2077 Update 1.02 Patch Notes was officially out yesterday on December 08, 2020. The game had several issues.

So, this was all about the Cyberpunk update 1.02 Patch.

Hopefully, you will like our approach on Cyberpunk 2077 Update 1.02 Patch Notes.