Update: Fall Guys has deleted the tweet that was confirming Season 3. But, we have attached the screenshot for you.

Fall Guys Season 2 Coming Soon. Yes, the official twitter page of this game has teased that Season 2 will be released soon. Season 3 of this game is also confirmed by them. So, we have decided to bring all information related to this tease of the upcoming season.

Here, you will get all details about Fall Guys Season 2 Coming Soon, Season 3 confirmed, and all possible other information. Let’s explore these details of the upcoming Season 2 and confirmed Season 3 of this game.

Finally, the developer of this amazing game has confirmed Fall Guys Season 2 Coming Soon. Apart from this, they have also cleared that there will be a Season 3 of this game. Due to this, all the fans are very excited. The upcoming Season 2 is not even released and Season 3 is confirmed. So, gamers are going to enjoy a lot of new things in the game through these upcoming seasons.

Fall Guys New Maps of Season 2 are already Revealed. If you have not seen them yet, check out this article about the maps of this upcoming Season 2. Only a little detail about this upcoming season is revealed yet. If we talk about the information related to Season 3, there is nothing revealed.

During the time of embedding the tweet regarding this reveal, we found that they have removed that tweet that was clearing that there will be a Season 3. But, we have embedded another tweet related to the release of Season 2.

According to the deleted tweet, Season 2 will be released after Season 1 and before Season 3. Since they have removed the tweet. So, we are not able to embed that specific tweet.

Yesss, the team have given me loads of spicy Season 2 content to start dropping on the run up to release!

Luckily, a user captured a screenshot and then replied to Fall Guys. Fall Guys also gave a unique reply to that user. We have embedded it for you. 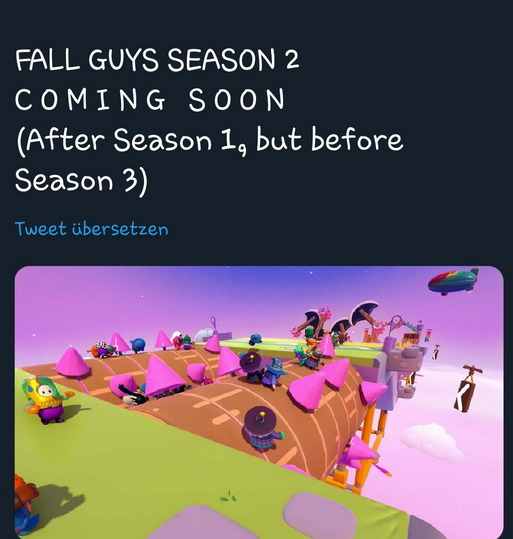 As you can see that they confirmed that Fall Guys Season 2 Coming Soon. This tweet also confirmed Season 3 of this game. Here is the quote from Fall Guys.

(After Season 1, but before Season 3)

Currently, we do not know the reason for the removal of this tweet. But, we strongly believe that they have accidentally confirmed Season 3 of this game. Due to this reason, they might have deleted this tweet and they will post it again when there will be the right time for the reveal of Season 3.

You can also read: Fall Guys New Maps in Season 2

We are super excited for this upcoming Season 2 and 3 in this game. Are you excited for both the upcoming seasons of this amazing game? Do not forget to share you opinion in the comment section. We would love to hear it from you.

In conclusion, we hope that you have got the complete details of Fall Guys Season 2 Coming Soon. The best thing is that Season 3 is also confirmed by the developer. if you have any questions or queries related to these upcoming Seasons for this game, feel free to ask us in the comment section. We are here to help you in solving all your queries and questions.

You can also read: Can you play Fall Guys on Mac?