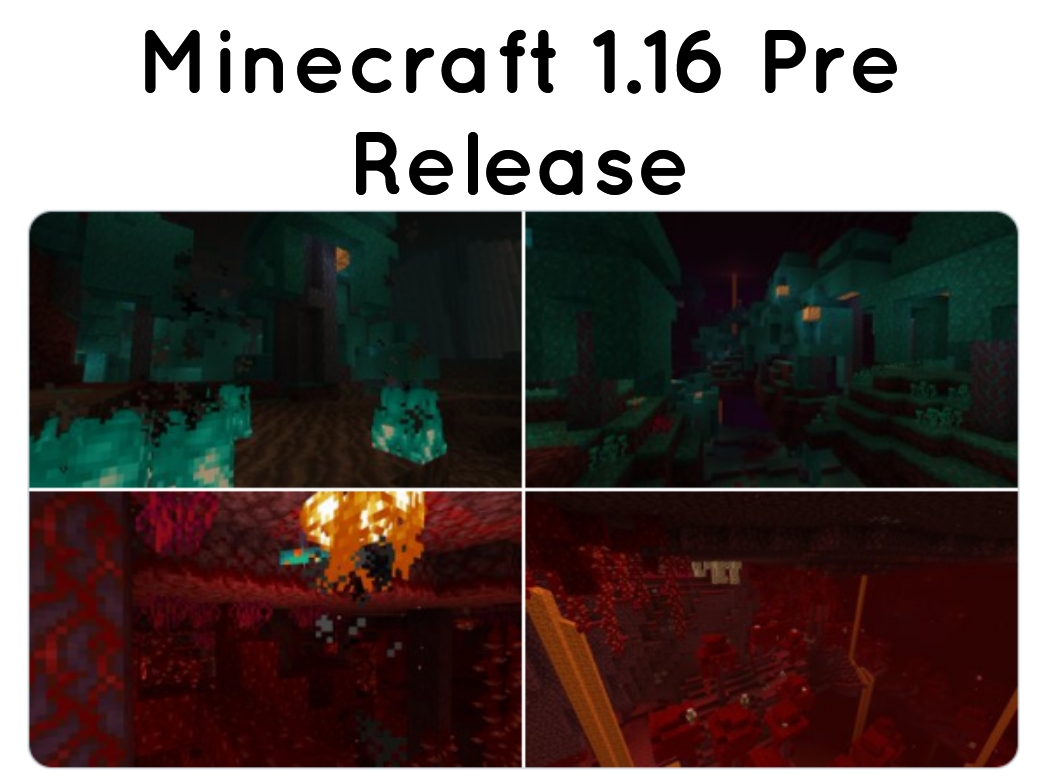 Guys, Minecraft 1.16 Pre Release 5 is finally out after Pre release 4. This pre-release has brought some smaller changes and something new to graphics settings. Here is what you should know before using pre-released versions.

Pre release 5 of the nether update is released now. In this pre release there are small bug fixes.

The main changes in Minecraft 1.16 pre release 4 is that hostile spawn rates in Warped Forests and Soulsand Valleys are Tweaked.

Please don’t use your current world on which you’re working while playing this version. This might corrupt your world files. So please make sure… before trying this version you have a backup of your world, or just create a new world!!

This pre-release involves some changes to the bucket, some villager changes, a couple of gamerules, and change to zombified piglin with the addition of some data packs and graphical stuff.

So here are new additions and changes in Minecraft 1.16 pre-release 1.

Over to the new world menu, you’ll notice a data packs toggle right above ‘more world options’. Earlier snapshots used to have an odd space that is now filled with the data packs button. After pressing this button, You’ll notice a similar menu like a resource pack menu. This would help you to load a data pack even before loading the world. Certainly, it’d help many players like me to spawn in nether which they always wished to!!

If You like customizing and spicing your game a bit this is the right option for you. Data packs would eventually make it possible. It also helps you to add some custom recipies of your choice. For example, if you’re a data pack creator and you wanna customize your armor using a smiting table? It can be done easily just by using data packs.

With this Minecraft 1.16 Pre Release, you can now you’ll be able to acquire milk from cows and mooshroooms by using buckets on them even if you’re in creative.

The same changes are applied to the bowl… you would be able to acquire stew from mooshroom, even if you’re in creative.

If a villager is struck by lightning, which has turned him to a witch… that witch will no longer despawn in the world.

Brand new gamerules have been added to this new Minecraft 1.16 Pre Release 1.

The first one is, /gamerule UniversalAnger (by default it is going to be off). If you’ve your friend in your world. This would make mobs mad at both of you, even if only you’ve attacked that particular mob.

For example, if you’ll attack neutral mobs like zombiefied piglin… it’ll be mad at everyone in the server instead of being mad just at you.

The second one, /gamerule ForgiveDeathPlayer (by default it is going to be enabled). Disabling it would cause zombiefied pigins to be mad at you even after being killed in the nether by them. This same applies to all neutral mobs. Neutral mobs would not forgive you even after taking you out!!

New graphics option has been added referred to as ‘Fabulous’

Enabling it would make use of per-pixel blending layers for some transparent elements, making some performance improvement.

So these are some new changes in Minecraft 1.16 Pre Release. Stay tuned for more updates.