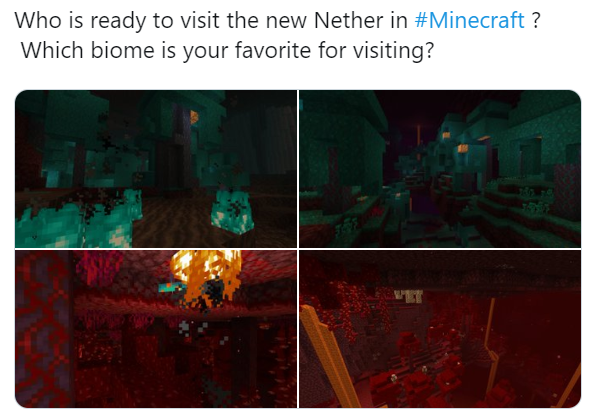 After the announcement of the Nether update, it became one of the hot topics in the Minecraft community. The developer team of Minecraft was taking feedback and suggestions from the community to make this nether update more interesting. They also asked the community and taken voting on what should name of the new mob and what should it barter. After all the development, Minecraft lover are waiting for Glimps of Minecraft 1.16 Snapshot.

Today design decision: What should Piglins give you in return for gold? Suggestions? pic.twitter.com/fY6ZaXsqYY

There are many new additions in the nether update. We have already provided all the details of Minecraft Nether Update 1.16. The most interesting part about this update is new mobs Piglins and Hollins are added. Many new blocks and items will be added to Minecraft Nether Update. All players were expecting a snapshot of Minecraft 1.16 in January 2020. But for some reason, it is delayed. Now Minecraft 1.16 Snapshot is scheduled in the first week of February. After the release of snapshot now here are new additions in the new updates.

This is an overview of Minecraft 1.16 Snapshot.

For every new Minecraft Java Edition version, Mojang releases any update in sequence. First, they release snapshots. After releasing snapshot they Pre-release the version. Then after that Mojang releases a full version of the update. Then again you will get further updates like Minecraft 1.16.1 and 1.16.2.

Piglins can now dance in celebration of completed hunt. For details click here

This is 16th snapshot of Minecraft 1.16 nether update. This snapshot is released. for more info click on this link. You will get all information regarding Minecraft snapshot 20w20a.

Minecraft Snapshot 20w19a is the 15th Minecraft 1.16 snapshot of nether update. This snapshot has many changes and bug fixes.

Also there are many changes and bug fixes. To read details of Minecraft Snapshot 20w19a click here.

Many new features added in this Minecraft 1.16 snapshot. Besides new blocks and biomes there are also other game improvements. In the Minecraft Snapshot 20w15a new sound Nether Music is added.

Blackstone and gilded Blackstone are the main blocks added this 20w15a snapshot. These blocks are useful to craft stone tools and make a furnace. They only found in nether and it is good alternative for cobblestone in nether.

New biome Basalt Delta is added in Nether. This biome is full of volcanic eruption having basalt column and lava Deltas.

This new Minecraft 1.16 snapshot has many new changes and addition. Most importantly new mob Zoglins are added in this snapshot.

Zoglins – this new mob in Minecraft Snapshot 20w14a is nothing but Zombified Hoglins. When you bring hoglins from nether to overworld then they becomes Zoglins.

Zoglins are very aggressive they can not bred or fed. They just know to attack everything they see.

Other Changes – Strider balancing is added. Speed of strider is increased significantly.

This is the 5th snapshot of Minecraft 1.16 Nether Update. There are many new additions and changes in this snapshot. Let’s check details of Minecraft 20w10a Snapshot.

New block hyphae is added which has stripped variant also.

There are many changes in this minecraft 1.16 snapshot.

Smithing Table got functionality. Now they can use to convert diamond item into netherite item.

Also there are many changes in items and blocks. To get full details of snapshot click here