Minecraft Axolotl Mob is yet another mob that is coming to the game through the latest Caves and Cliffs Update. A lot of information about this neutral mob is revealed and we have decided to bring them to all gamers.

Here, you will get the complete details about the upcoming Minecraft Axolotl Mob, its behavior, attacks, location, health points, and much more. Let’s explore all the information about this upcoming mob that is revealed now. 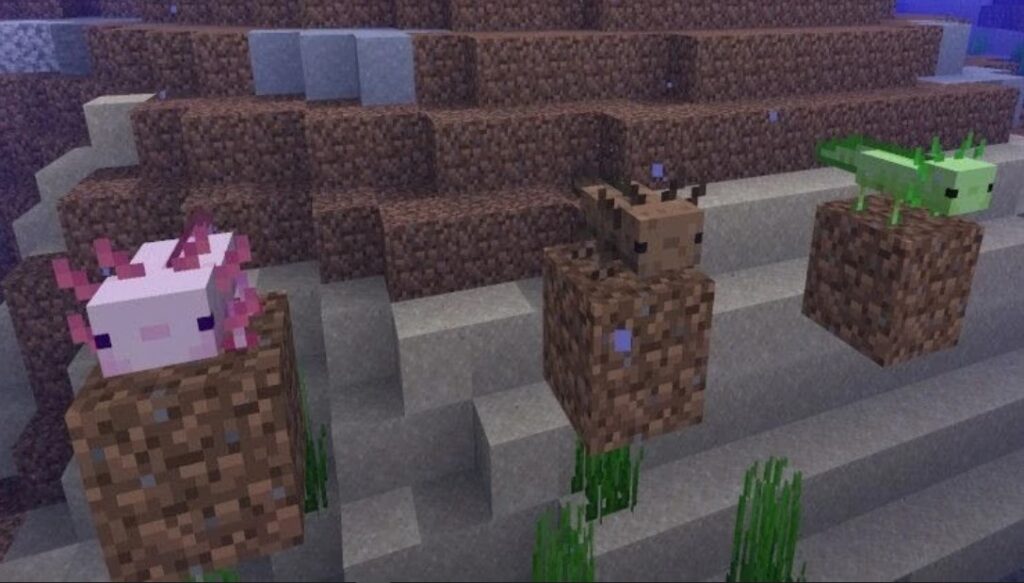 A lot of Mobs are being added to the game through the major upcoming update. Minecraft Axolotl mob is also one of the mobs that will be included in the game. It is actually a neutral mob. This mob attacks other mobs in the game. But, it can also attack you if you will try to attack Axolotl.

The interesting fact about this mob is that it is based on a real-life creature. That creature is a nearly extinct neotenic salamander from Mexico. So, it will be interesting to see it in your game. Another unique thing about Axolotl is that it is found in the game in different colors. it includes Albino, yellow, green, brown, and purple/pink.

Location of this mob

How to Tame this new mob?

You can tame this mob in the game but, the method is different from the traditional method. You will have to pick Axolotl in a bucket. Once you pick this mob, you will be able to use it in the marine adventures, kept in an aquarium, or any other water bodies.

That was the method to tame this new Minecraft Axolotl mob in the game. Minecraft players, now it is time to know about the Attack Strength and Health Points of this mob.

Currently, both the attack strength and health points of this upcoming mob are not revealed. Since it attacks drowned, guardians, elder guardians, other fish, and even players when players attack it. You can say that it has got amazing attack strength.

It plays dead when damaged to regenerate health. So, you can imagine its Health Points. That was the complete information that is available about this upcoming Minecraft Axolotl mob now. We will update you when more details about this mob are revealed in the future.

So, become ready to see a lot of new mobs and other items and features in the game through the upcoming Caves and Cliffs Update. This update will be released in Summer 2021. So, wait for 2021 to get all these mobs and other features and items in the game.

In conclusion, we hope that you have got the complete details about this Minecraft Axolotl Mob that will be included in the game through the upcoming Caves and Cliffs update. If you have any questions related to this upcoming mob in your mind, you can ask us in the comment section. We would love to answer your questions.