Now early access to games has been launched worldwide. Now you can download this Minecraft Earth Early Access for iOS or Android and start playing the game. this game is a totally new concept of bringing Minecraft game into a real-life experience. You might have played Minecraft, but playing Minecraft earth if a totally different experience. Therefore to make it easier we have collected all information and made this complete Minecraft Earth Guide for you. From downloading the game to the building structure, all you need to know about Minecraft earth is given here.

Minecraft Earth is having the same concept as original Minecraft. Players need to collect resources. But this is an augmented reality game, your character in the game will only move if you yourself walk around. As you walk, the character in-game will also move in the same direction. You will see tappables like grass, trees, mobs or sometimes magical chest. You can see tappables in the map you have to move in the direction of tappables to reach near them. This is one of the important steps in basic Minecraft Earth Guide.

You have to tap on tappable to collect them into your inventory, this will be resources for you to build various structures in game. each tappable gives you different rewards. Tapping on the tree will give you woodblocks, tapping on the chest can give you a surprising reward. Also by collecting resources, you get experience points that help  you to reach higher levels in Minecraft. After reaching every new five levels you unlock a new build plate. More information on the build plate is given below in this Minecraft Earth Guide.

Walking through the game you will encounter different mobs. That are also tappables and you can collect mobs into inventory by tapping on them. So when you leave the house, try to collect as many resources from tappables near you.

This is the main part of the game which makes is special. In Minecraft Earth Build mode you will build structures using augmented reality. When you tap on the second tab in-game build mode of the game will open. You can see build plates in build mode. Build Plates are nothing but space on which we can build a structure in Augmented reality.  These build plates come with default structures on them. You can clean it and make your own structure on them. For this, you can use resources collected in the game. As per Minecraft Earth Guide, you can move this build plate and place it anywhere.

This is the most exciting part of the Minecraft earth game. When you are moving around and collecting resources, on the map, you will see red beams (adventure beacon) where you will find adventure. To Play adventure, you have to tap on it. Playing adventure is nothing but survival mode in Minecraft Earth because here you will encounter a lot of monster mobs that can harm you. But also at the same time, you can get a lot of rare resources such as iron, diamonds, Coal and valuable ores. With Pickaxe, you have to dig down on adventures. 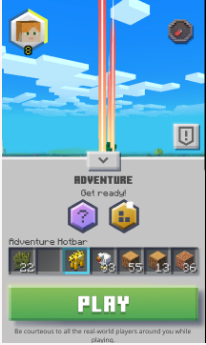 In build mode, you have the option to invite friends using QR code. By scanning QR code your friends can join you to build on Build plates. You and your friend can interact with the same build plate to build structures together. Also, using the Minecraft Earth Code Scan option, you can join with a friend to play adventure together, where you both will collect resources and will fight with mobs together. To play together, you and your friend should be at the same location.