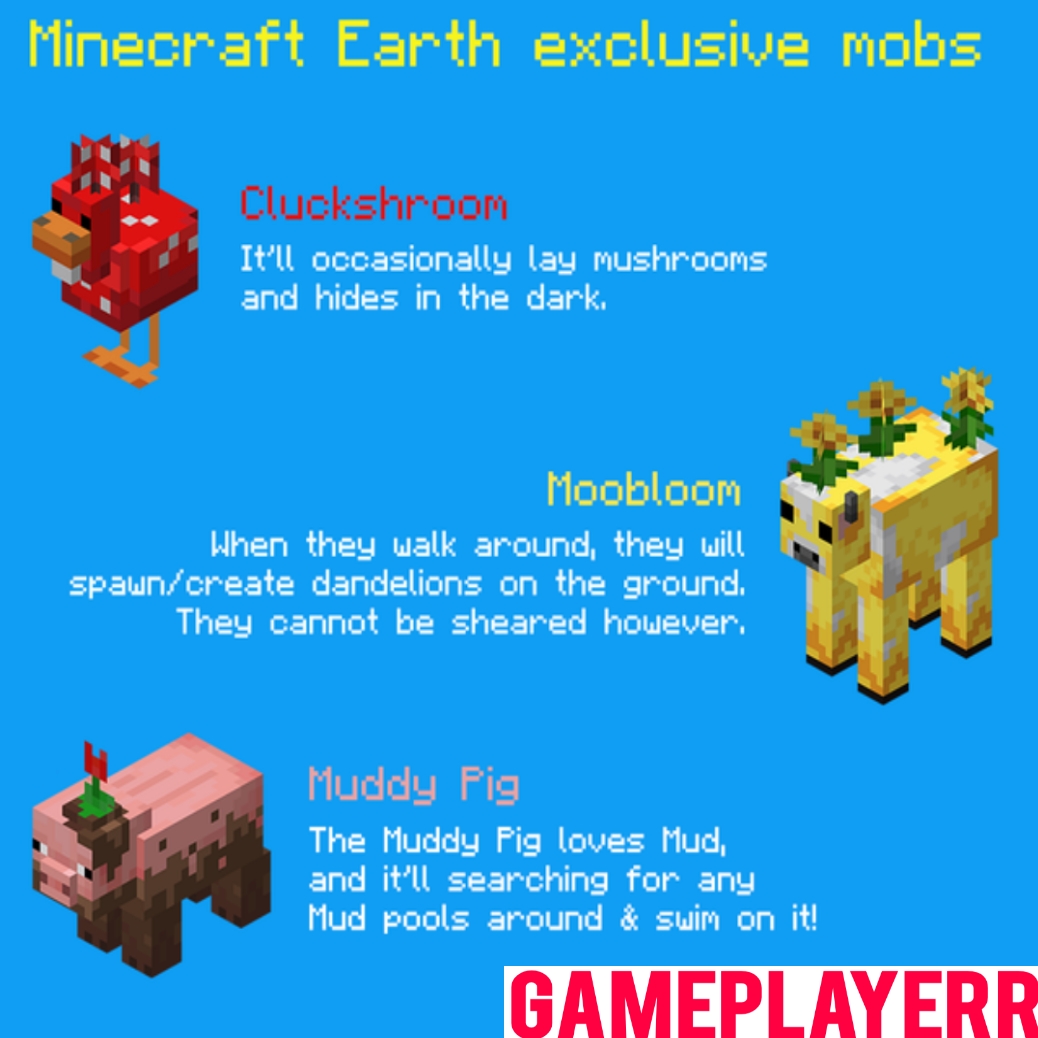 There are a lot of creatures in the Minecraft earth game. Mobs are basically all the animals found in the game. These animals are found while playing the game some of them are friendly while others attack you. The mobs are distinguished creatures that allow the user to enjoy the game and really make it user-friendly.

Some of these Mobs are similar to the old game and some of them are upgraded versions to them. So you could actually find some mobs similar.

The Mobs you find here in the game are of three tiers – Common, Epic and Rare.

Common mobs are those creatures that are found everyone in the game – cow, parrot, pigs and etc. These Mobs are found under tappables and build plates. Let’s see Minecraft Earth Mobs Wiki for Common Mobs.

Cow – These commonly found cattle are found near farms. They give you meat and leather required to craft other objects.

Creepers – The Green monster-like creatures are the oldest among all mobs continued in this game version. They are hidden afraid of the sunlight and found commonly at underground places. They are rare to encounter.

Chicken– These are small white mobs similar to chicks of a hen. They are not dangerous but a good source of food and feathers. Commonly found almost everywhere.

Ocelot– This Mob is a cute version of a kitten. This yellow mob is tamable and generally found in jungles.

Parrot– This red mob is a useful one. The Parrot can be trained and used while playing adventures as they can imitate sounds of the nearby mobs.

Pig– The similar found the commonest Mob both in the real-world and Minecraft world. It loves to play in Mud.

Salmon– This fish Mob is found near water sources in the game. This reddish fish hides under build plates and a lucky pick if you catch them.

Skeleton– They are the white tall structure that lookalike the skeletons in the real world. They attack you using the arrow. Usually hidden behind objects this is a dangerous Mob.

Spider – This mob is very common. Mostly found hiding in underground caves. In bright light they don’t engage you unless you attack them, but in the dark they become very dangerous and aggressive. These mobs in the mine craft universe which have the ability to climb walls.

Sheep – These mobs are also a common find in the game. They are a good source of wool and meat.

Zombie – These dangerous mobs are Green Creatures similar to reel world zombies. They are aggressive in the dark and tend to attack you.

Rare Mobs – These mobs are very rare and seen on some occasions in the game. let’s see Minecraft Earth mobs Wiki for rare mobs.

Mob of Me – This mob is fun to the game. This mob copies your player’s skin and interacts with the fellow mobs on the build plate.

Cluckshroom – This mob is like the chicken mob just a bit taller and red in color. This Mob a very good source of mushrooms. It is a result of mutation.

Moobloom – This mob appears to be a cow mob with yellow color infused with some dandelion on its back. It roams around the world leaving behind flower seeds.

Horned Sheep – These mobs are always wandering aimlessly in the game. It is a good source of meat.

Wooly Cow – These mobs are cows covered with wool. Moving from one place to another and mostly staying away from Water and lava. They are a good source of Wool and meat.

Jumbo Rabbit– A little bit taller than the older version of Rabbit. This mob is found hopping all around you. Good source of meat.

Epic Mobs – These mobs are the rarest finds in the game. A few lucky users have been able to discover them. Let’s See Minecraft Earth Mobs Wiki for Epic Mobs.

Muddy Pig – This mob loves mud. A muddy pig loves being covered with mud if you come across one dry pig it will find mud and jump in it to cover itself with mud.

Jolly Llama – This mob is a Christmas themed mob just updated a few weeks ago. A Classic reindeer mob added to the game. Check our Guide on How to get a Jolly llama.

Summary – This means great news for the users as the developers will be adding new mobs to the game, unlike the old game some mobs were discontinued in the new version of Minecraft earth. Follow official twitter on Minecraft Earth for upcoming new mobs.