Minecraft developers have released snapshots for 1.16 and now they want the community to take Minecraft Nether Update Survey. From the last MINECON 2019, the Minecraft community is overwhelmed by updates released by Mojang. After the Minecraft 1.15 Buzzy Bees Update, now Minecraft is ready for the next big update that is Nether update. More information about this Minecraft 1.16 survey given below.

Minecraft always cares about the players and Minecraft community. It is the most vibrant game community which actively provides input for the improvement and changes in the game. We know that Minecraft 1.16 nether update is one of the biggest update, it ads many biomes, features, new blocks and new mobs in nether. 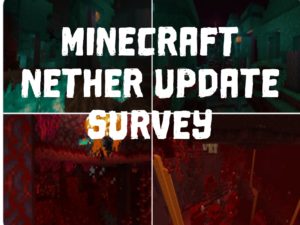 Minecraft Nether update Survey is created to take feedback from Minecraft Community about this new update. There are four new mobs Piglin, Hoglin, strider and zoglin are added in this update. Also many new blocks such as ancient debris, neherite, Blackstone, basalt and crying obsidian etc are added in Minecraft nether update.

Remember that till now there are 13 snapshots of Minecraft 1.16 update has been released. The full version of the nether update is yet to release. But Mojang team declared that there will be no further snapshots for this update. that means all the features in the nether update are now released one by one in total 13 snapshots. The last snapshot was 20w17a.

anyone can fill up the survey form. this survey is taken using surveymonkey form. Here are the 6 questions asked in the survey.

So these are the questions in Minecraft Nether Update Survey. If you want to take an official survey then click here.