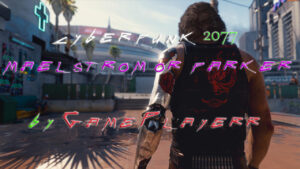 The first and very important choice you have to make in the game is during The Ride Job Quest in the game. You might be very much confused about your first choice that you are going to make in Cyberpunk 2077 as Cyberpunk is a game of choices.

The Choice: Maelstrom or Parker

Cyberpunk 2077 Maelstrom or Parker: The outcome of the choice

Visiting Maelstrom: If you thinking about visiting maelstrom then firstly you should know about the outcome of the choice you have made, however it doesn’t matter what choice you make.

If you have decided to visit Maelstrom, then you will get a job which is known as “The Pickup”. In this quest, Jackie will be with you and will go to Maelstrom with you to get a Flathead bot for Dexter Deshawn. In this job, you will talk to the Militech agent and have to strike a deal with her. You have to make some more choices regarding talking to Royce, and for the option to save and free Brick for the former leader of the Maelstorm.

So this was all about Cyberpunk 2077 Maelstrom or Parker.

Hopefully, you will like our approach on Cyberpunk 2077 Maelstrom or Parker? Which one you should visit first?