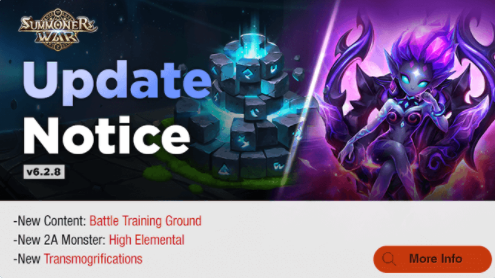 Summoners War mobile online multiplayer game received an update on 28th April 2021. The announcement is made via the official Twitter handle of the game. Here we have the details of Summoners War Patch Notes v6.2.8 Update Today 2021.

This massively popular online game received multiple minor updates this year. Recently the game has celebrated its 7th anniversary in the last week of April arranging various gaming events and prizes. Summoners war is an action-packed RPG fantasy game that can be played with another player online. On 28th April it has announced a v6.2.8 update. Let’s check out the details of this Update.

The maker of this game Com2uS! has released the details of Summoners War Patch Notes of the new update on their official website. This will be auto-updated and will be applied during auto maintenance of the game on android and iOS.

Let’s check the details of each part.

This is introduced in v6.2.8 update, it is nothing but the building where you can try mock battles using various monsters. You need to install this battle training ground from the shop section of the game. But for that, you must have reached level 21 or above in the game.

Also there are some rules for battle training ground. You will also get rewards after completing 3 missions in mock battles.

There are many new stats and skills for this upgrade in Summoners War Patch Notes v6.2.8 Update Today 2021. Also you can get 20 Dimension Hole Energy refunded from the [Event Icon > Game Guide > Dimension Hole Update Notice].

There is also Secrete Dugeons improvement in this update. You can now send the secret dungeon entry request to other Summoners.

Also there is change in reward for summoners who found secrete dungeons.

This is also one of the important changes in Summoners War Patch Notes v6.2.8. Now battle can proceed immediately without tapping on screen because now victory dialogues displays on-screen are simplified.

There are also many minor changes and upgrades in Summoners War Patch Notes v6.2.8. You can check details here.

– [Arena] Fixed an issue where the amount of glory points for each grade in the Match-up menu being displayed incorrectly.

– [Summonhenge] The selected summon monster info will be maintained even if you don’t have any 7-Year Special Scrolls.

– [Summonhenge] Fixed an issue of an abnormal screen showing up when you tap the empty spot of the monster list when selecting the monsters for the 7-Year Special Scrolls.

– Fixed an issue of the incorrect server info being displayed in the list of blocked Summoners.

– Fixed an issue of the chat block list button not showing up from the Game Settings > Options menu.

– Fixed an issue of your 7-Year Seal Shop disappearing after you visit another Summoner’s island.

You can also check –