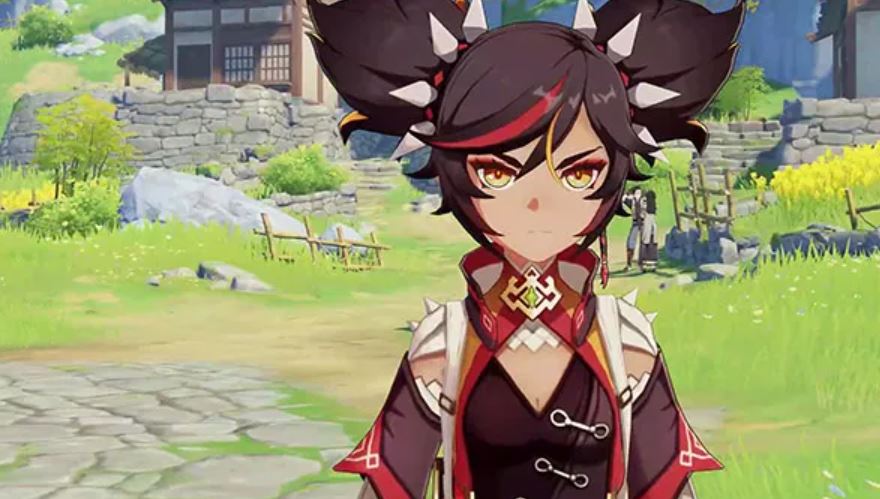 You can also read: How to respawn the ender dragon Minecraft 2020

Xinyan is a fantastic new playable character in Genshin Impact. Xinyan is a female and she celebrates her birthday on 4th November. The region of this character is Liyue. You can obtain this character via Wishes. Xinyan is dark, tanned skin, amber eyes, and has a dark-brown hair. When we would talk about the dressing of this character then she mostly wears a tank top as well as white shorts. She has a red and white vest with flared red, black as well as white sleeves. Xinyan carries a brown, white, as well as square ruan with an axe-like bottom. She also got a black as well as a red ribbon that is tied around her right leg.

In the video, the developer of Genshin Impact is promoting the new character Xinyan who has just arrived in the game. This new character is a heavy-sword user with the fire element that takes a simple role in the Genshin Impact game as “Diluc”. It deals with high damage at a slow speed. It has a great visual design and personality that allows the players to for and want to collect the many characters.

You can also read: How to Boogies before Oblivion in Fortnite? Easy Guide 2020

In Genshin Impact New Character Xinyan Demo, you can see that Xinyan is a one geared character towards the western fans. She has a great attitude and accent. From the heartland, she is a starry-eyed musician. The short video is only a demo of this character. Xinyan is the final character that is to be showcased from the latest update. The fans should be waiting for the update for new spotlights. She is a perfect character and she looks amazing and has her own unique features. She has a bubbly attitude that may stand out from other characters.

Here, we have embedded the video of the Genshin Impact New Character Xinyan Demo so that you can easily watch the video with a single tap. You need not visit the different place to gather the information, we have provided all the required information related to this character at a single place.

It was the complete guide on Genshin Impact New Character Xinyan Demo. Now, we would like to conclude this article with the hope that you have got the complete information regarding this character. If you have any queries regarding this then you can ask us in the comment section. We would be happy to solve your queries.

You can also read: How To Get Mod Components Destiny 2