PS4 Update 8.03: The PS4 update 8.03 is now rolling out, the update includes a system software update which is fixing the performance of the console. There is some new stuff with the PS4 update as well, it’s not just a performance fix update. You will not be forced to update your PS4 for this update as it is an optional update but if you update your PS4 then it’s good because then you will be getting better PS4 performance while gaming, have a look at more details. 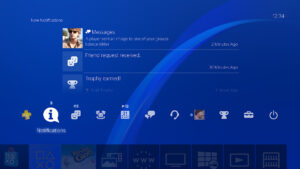 PS5 got an update today which fixed some issues in its firmware but Sony didn’t forget its previous gaming console PS4 while giving an update to PS5. The PS4 has also received an update which is adding some new stuff to the console as well as improving the performance of the console. The update is more than that which we will discuss in the next section of the article.

The PS4 update 8.03 is now rolling out to the users and sony is not forcing you to update your OS4 console to the latest version. This update is adding some new stuff to the console and as well as fixing some performance issues in the console. Sony rolled out this update today on Dec 09, 2020, after they released an update for PS5 which was focusing on fixing some issues in the system firmware of the console.

Update PS4 Manually to system software 8.03: As sony is not forcing you to update your console to the latest firmware, however, you can update the console manually. Just head over to settings in your PS4 console and then move to system software update, now you can check for the update, if you get the update then you can choose to update or be on the old firmware version of the console. We will suggest you update your console to the latest PS4 firmware 8.03 as it adds some new stuff(we will discuss next) and some performance improvements.

So this was all about the PS4 update 8.03, now let’s look at the patch notes.

Sony has added much to the PS4 firmware update 8.03 but they have made some performance improvements with this firmware update which will make your PS4 overall performance fast, as your PS4 runs on an HDD, which is way old technology. The next-gen console such as PS5 and Xbox series X and S are coming with the latest NVME SSDs which is way faster than the HDDs, so we would suggest you update your PS4 to the latest firmware.

Here is the list of complete Patch Notes of PS4 8.03 update, have a look:

This was the only feature that has been added to the console with the PS4 update 8.03, and the rest are the firmware fixes. PS4 might not receive a further update as Sony is now focusing on its latest release PS5, as more and more games are getting launched on the platforms, there are new issues coming out in the console. Let’s see if we get any update for PS4 after the PS4 update 8.03 or not.

Hopefully, you will like our approach on PS4 Update 8.03 system software improved.