Minecraft 2.05 PS4: Minecraft is always releasing new updates from time to time. This game has received many updates in the last few months. After releasing 1.15 Bee update in December 2019 Mojang team has now released snapshot of 1.16 Nether Update. On 3 March 2020, New Minecraft 2.05 PS4 Update is released by Mojang team. Minecraft has a huge community and players play this game o different platforms such as PS4, PC, Xbox, Nintendo, and mobile phones also. Here this Minecraft 2.05 PS4 update is about some changes and error fixes for PS4.

In this article, we are going to see all the details of this new PS4 update. Earlier in December 2019 Bedrock edition was launched for the PS4 platform by discontinuing traditional PS4 edition. This was one of the major updates for Minecraft PS4. After that update Minecraft 2.05 PS4 update is one of the big updates for this platform. 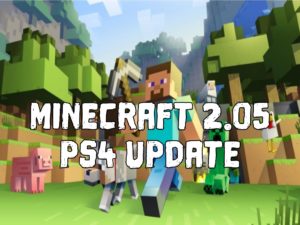 In earlier Minecraft PS4 Bedrock Update crossplay was also added for PS4 players, Which means they can play a multiplayer game with any player playing on different platforms such as PC or Nintendo. Now this Minecraft PS4 2.05 Update is not have added any big feature but it has fixed many issues in the current Minecraft PS4 Game.

This update was launched on 3 March 2020. As soon as the update launched every Minecrafter wanted to know full information about Minecraft 2.05 PS4 Update Patch Notes. So here are the fixes and changes in the new PS4 2.05 Update.

So this Minecraft 2.05 PS4 Update is having minor but important fixes for Minecraft game on PS4.

This update is small in size and it is just 160 MB to download. You must download it for all versions of the game if you play on PS4. To Download this Update you should visit official website minecraft.net