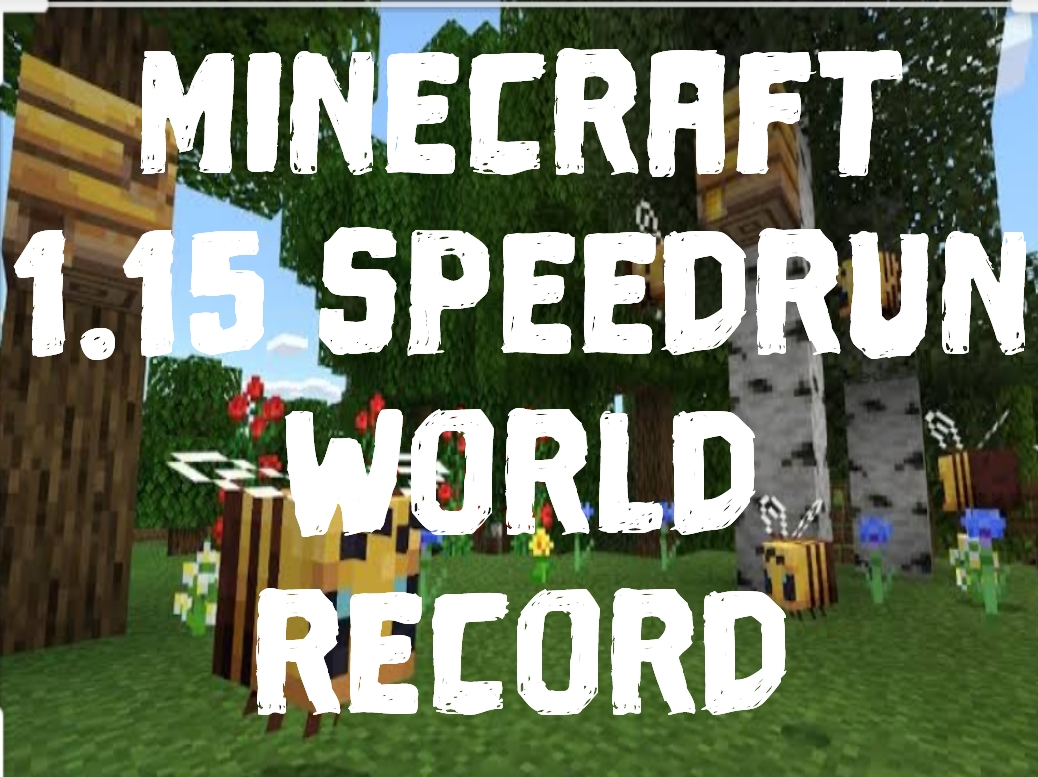 How long do you think it takes to complete a game of Minecraft and set a world record? From the first load in the world to the last hit on the ender Dragon and taking your way back home through the portal making you through those end credits. Youtuber Dream has created a new Minecraft 1.15 Speedrun World Record. and he completed in just 22 Minutes and 6.9 Seconds.

How long it will take, if you try?  Too long if you think about all the stuff you do to get from point of staring to point the end:

Here is what every player will do after loading into the game.

As obvious every player needs to punch a tree to acquire wood, whether you’re playing normal survival or doing a speedrun to set a world record. The second thing on the list is to make a crafting table to make a wooden pickaxe to mine stones.

Until this everything seems normal.

But things are gonna change after this.

For survival, basic requirements are food and shelter… Talking about shelter, just ignore it if you are ready to set a record.

With all the crashes, failures, and plain old bad luck, it would probably take the average Minecrafter – for some – it takes lots and lots of hours to defeat the game.

Most of you might know him, especially those who spend time on YouTube searching Minecraft speedrun and world records.

This Minecraft 1.15 Speedrun world record goes to “DREAM”, one of the famous Minecraft YouTuber known for his efforts in speedrun and challenges.

He defeated the game on a completely random seed, without using glitches and one of the most insane things is, he broke the record on the latest version of Minecraft i.e. 1.15!!

According to him, He had a lot of fun, but also a lot of headaches when trying to beat this record. He almost stopped trying multiple times, but he had my friends to encourage him to keep going. It was an amazing moment that they got to be there for him.

He spawned right in the desert biome… which wasn’t a good start at all.

He collected some sticks from dead bushes while passing through the desert.

He headed towards savannah biome to grab up some wood. He headed back to the desert to loot the village which was right in front of him… he looted up few beds to burst them up in the end to defeat dragon… he also grabbed up some hay bales for bread as the only food source for him.

On the way, he managed to get some stone from the nearby mountain cliff… he crafted himself some stone tools and ran towards the iron golem to acquire some iron from him. After defeating the golem, He headed back on the way to the water source where he found some gravel (for flint) and crafted a bucket to collect water in need of emergency.

While heading back to the trail, He was so fortunate that he found a desert temple right next to the place where he collected water. He found looting III in the temple which was a good move.

He also collected some TNT’s from the temple for future use.

He headed in the cave which was right beside the temple. Where he found himself some iron. He mined some iron and coal using TNT’s, which was again a good move to save time.

He collected some iron as much as possible while fighting with those creepy mobs. He also found his first enderman right in the cave. And he also got his first ender pearl form from the same enderman.

He smelted his iron saving every bit of coal. And crafted himself a shield to fight with those skellies in the deserted night.

A MOVE TO NETHER:

After this, he headed back to the surface in search of the lava pool. As soon as he found it… he got up to build himself a nether portal. He lighted it and made his way to nether. He acquired some xp’s from the quarts and enchanted his sword with Looting III and he headed straight to the nether fortress which he found right in front of his spawn. without wasting time he started to search for blaze spawner… as soon he found one, just for his sake he looted 19 blaze rods from blazes.

He also marked his way by placing cobblestones on the roof of the castle corridor. He also collected some Netherracks for later use and headed straight to the overworld.

Being lucky it was night time… best to collect some ender pearls. He killed every enderman coming on his way. But he was lucky until he got slowness from the nearby witch. But he didn’t give up and continued his journey. He grabbed up some milk from the nearby cow which helped him to overcome the slowness effect. He continued collecting ender pearls as much as he could.

WAY TO THE END:

He crafted some eye of ender on the way and started his search for the stronghold… praying it not to be a zero eye portal frame. He mined straight down searching for it. He was fortunate as there was one eye of ender already installed in the frame. He headed to the end as fast as he could. He destroyed all the end crystals one by one using his bow. After destroying all the end crystals he aimed his arrows one by one on the dragon. He used beds on dragon every time it came down.

He finally defeated the dragon in no time.  And set his name at the top in the list of Minecraft 1.15 speedrun world record by defeating the game in 22 minutes and 6.9 seconds (22:06:9).

We’d like to congratulate Dream for setting this Minecraft 1.15 speedrun world record in an insane amount of time without using glitches on a random seed with difficulty set to normal.